The Russian language has been classified by the Defense Language Institute, a division of the Department of Defense, as Level III (out of four) difficulty for native English speakers.

Lots of factors come into play when determining language difficulty, and most of those factors tend to be subjective to the language or the learner.

For example, your cousin Pete who was class valedictorian and spent a few years abroad in Eastern Europe might find learning to speak Russian a piece of cake. On the other hand, if you are just starting to learn your first foreign language, you might find Russian to be difficult. In this article, we will try to answer the question: How hard is it to learn Russian?

Is Russian the Hardest Language to Learn?

With all the factors that come into play, being objective about whether Russian is hard to learn can be difficult. However, we can look at some facts about learning the Russian language that lends to its appearance of being one of the most difficult languages to learn. First, we will cover what is “hard” about Russian, which is “easy” about Russian and offer some comparisons to other languages that are considered difficult to learn.

How is Russian Hard to Learn?

How hard is it to learn Russian? The following list briefly describes the ways in which Russian can prove difficult to many learners.

One look at a Russian website and it’s already like you’ve been thrown overboard from the Germanic- or Latin-based language ship. The Cyrillic alphabet, though offering some similarities to the English alphabet, has 33 letters, which is a good eight completely new letters to learn.

New letters bring about new sounds, and so do new letter combinations. Russian uses quite a few consonants in their words and each consonant has its own distinct sound.

Cognates are words that are spelled similarly in both languages and mean the same thing. For example, the word “technique” means the same thing in both French and English. “Coffee” is considered a cognate for English and Russian (Кофе). As you can see, to even learn cognates, you will need to understand the Cyrillic alphabet.

Russian uses six cases and each one requires a different spelling of the noun. Each case has its own suffix added to the noun, so the case must be determined before writing or speaking the word.

How is Russian Easy to Learn?

As impossible a hurdle as the above aspects of Russian may seem, there are a few ways in which you might find it to be easier to learn.

No articles are used in Russian. Personally, this is a selling point for me. You do not have to memorize whether your nouns are masculine or feminine or whether you need de, het, le, la, etc. to proceed them. Headache averted.

Russian speaks the past, present and future and that’s it. Forget all that Present Perfect and Past Continuous stuff!

Order In most languages word order is important, but with Russian’s case system, it matters much less. In fact, it doesn’t matter if you begin sentences with the object or the verb. This makes it easier for new learners to convey their messages from the get-go.

How does Russian Compare to Other Languages?

Chinese is often considered alongside Russian as one of the hardest languages to learn. Again, this will vary depending on the native language of the learner. A native English speaker might have an easier time learning Russian, while a native Japanese speaker might fare better with Chinese. Here are a few comparisons between Russian and Chinese.

How long does it take to Learn Russian?

Most experts will agree that to have a sufficient understanding of Russian with intermediate fluency, you will need about 1,100 hours of immersive study. The Defense Language Institute offers Level III Russian as a 48-week course. This means that independent study and class time would need to be about 22 hours per week.

Obviously, learning with an online program or such would grant you a bit more leeway. Ultimately, the length of time it takes you to learn Russian will be determined by your motivation to learn, the amount of time you spend in it, and your desired fluency level.

How long will it take to Speak Fluent Russian?

As with learning Russian, becoming fluent will depend highly on the learner. It goes without saying that the more time you spend practicing something, the better you will become at it. Most experts believe that to become truly fluent in Russian —that is thinking and speaking in Russian— requires 7-10 years of study.

Immersing yourself in the language is often thought the best way to enhance your fluency. This means living in a Russian-speaking community and using the language in daily life. Fluency can be achieved without immersion, but it might take longer. Again, fluency level is highly influenced by the motivation of the learner.

This is an excellent tool for learning the Russian Alphabet complete with cursive form and pronunciations.

One of the most popular free Russian learning sites has to be Duolingo. It is a fun, colorful program that makes language learning almost feel like a game. There is little grammatical explanations with the free version, but when used in conjunction with other programs, Duolingo can be a great way to break the monotony of traditional study.

Another great free resource to consider is Anki, which is the Japanese word for memorize. This app uses spaced repetition flashcards to help increase your vocabulary.

Memrise is another useful app that works similarly to Duolingo by speaking and reading useful phrases with little emphasis on grammar. This is another app to consider using in conjunction with a more in-depth learning platform or as practice away from the classroom.

RussianPod101 by Innovative Languages, is — in our opinion — one of the most comprehensive programs for learning Russian. Premium PLUS subscription plans include one-on-one instruction from a native speaking Russian teacher. It offers hundreds of video lessons and podcasts along with interactive learning tools. This is an ideal course with a monthly subscription fee for serious learners who cannot attend a class.

MimicMethod is the brainchild of polyglot, Idahosa Ness. It focuses on “learning by ear” and mimicking what is heard like a young child does. MimicMethod offers three-part courses including over 6 hours of video lectures with Ness, training exercises and learning tools like flashcards. This is an ideal system for those who excel in audio learning.

Conclusion: Russian is Difficult, but not Impossible!

While the Russian language can prove difficult for some and easy for others, ultimately the answer to this question depends on the student, their native language, and how much time they can devote to learning Russian. Is it impossible? No way! With the above-listed resources, you can start learning to speak Russian today.

The Best Way To Learn Russian (According to Reddit) 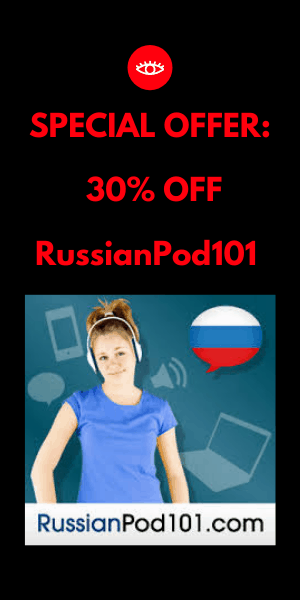