Determining whether German is a hard language to learn is highly dependent on subjective factors such as your native language, how many other languages you speak, and your personal motivation level. In this sense, it can be difficult to call any language harder or easier to learn than another.

The Defense Language Institute considers German to be a Category II (out of IV) language for difficulty. Their class lasts for 35 weeks and includes about 750 hours of study. At the end of the class, students are expected to have a Level 2 comprehension where Level 5 is completely fluent.

In this article, we will attempt to determine just how difficult German is to learn.

Is German Hard to Learn?

German, along with English, Dutch, Swedish and Faroese, is an Indo-European language in the Germanic family. This means that the above languages derived from a common ancestor and generally have some similarities. A native speaker of these languages might find learning German to be easier than a native speaker of another language.

In order to figure out how difficult it is to master the German language, let’s go over some reasons German appears to be a hard language to learn. We will also cover ways in which German can seem easy to learn and compare it to some other languages that are considered difficult.

Ways in Which German is Difficult to Learn

Here are some of the ways in which German may seem difficult to learn.

Anything different from what you know can seem difficult until you learn the rules. Most languages have their own specific grammar rules and learning these can feel difficult, especially if it is your first time learning a new language.

Unlike English, German nouns are masculine, feminine or neutral. Definite articles include der (M), das (N) and die (F) in nominative case, but they change with each case.

Recommended: Use this trick to get up to 77% off GermanPod101

Ways in Which German is Easy to Learn

On the flip side, German has its easy points, too. For example, the German language has been standardized. So, even though you will find a variety of dialects, words and language rules are the same wherever German is spoken. English, on the other hand, is not standardized and this is most notable when comparing British English and American English. For example, American English uses cookie or french fries. British English refers to those same words as biscuits and chips, respectively.

It is easy to see how one could easily be confused even when speaking their native tongue. In all German-speaking areas, asking for keks will always be understood that you want a cookie. A few other ways in which German can be an easy language to learn include:

German letter pronunciation is consistent and phonetic. The sound of the letter is always the same. Consider the English c in words like circus. As a non-native English speaker, words like this that include both the hard and soft sounds of the consonant can be a major headache.

Likewise, spelling is uniform and structured. Diphthongs like the German ei will always be pronounced as eye. In English, the same diphthong can be pronounced at least two different ways, and there are no clear-cut rules for spelling the sound. For example, both weird and ear sound alike but are spelled differently.

German verbs, both regular and irregular, follow a pattern for conjugating. Though it may seem difficult to learn at first, once you figure out the pattern, it becomes much easier.

German and English, deriving from the same language family, use almost 40% of the same or similar words. Cognates are words in different languages that are spelled similarly and mean the same thing. For example, the English athlete is athlet in German.

How does German Compare to Other Difficult Languages

Chinese uses 2,400 basic characters and verbs remain the same independent of the subject. The alphabet does not share any common characters with the German alphabet.

How Long Does it Take to Learn German

How Long Does it Take to Speak Fluent German?

Gaining complete fluency, which is thinking and speaking in the language, can take between three and five years. However, this is not a guaranteed time parameter. Just like with learning to speak German, it highly depends on the learner. Another factor that contributes to fluency is immersion.

Immersion is living in a German-speaking community and using the language daily. Though it isn’t always possible to learn by immersion, it is the fastest way to gain fluency.

German uses the 26-character Latin alphabet like English. It also contains four additional characters, three of which are the umlauts ä, ö, ü and the ligature ß. Many of these letters are pronounced the same in German and English making it super easy to learn. Here is a resource that can help you master the German Alphabet.

If you are considering learning to speak German, you can test the waters with a few different free resources. Duolingo German is one of the most fun sites for language learning. Its game-like platform and variety of speaking, writing and reading exercises keeps learning fun and interesting. Duolingo will not give you in-depth coverage of German, but it is a good supplement for a more comprehensive program.

Another free language learning platform is Deutsch Leren. It offers 10 beginner lessons with German exercises and alphabetical word lists. After mastering the beginner lessons, move on to advanced German lessons. Again, this isn’t the most comprehensive program, but it does give you an idea of what to expect when learning German.

One of the most comprehensive courses for money is GermanPod101 by Innovative Languages. This offers monthly subscriptions as low as $8 with four expertise levels from Absolute Beginner to Advanced. You’ll find tons of podcasts, videos and interactive learning tools to guide you on your path to German fluency.

Another paid resource is Mimic Method developed by Idahosa Ness. As a musician, he uses music and sound as the basis for learning. Similar to the Pimsleur Method, the Mimic Method claims to teach you the same way you learned your native language, by listening and mimicking.

So, is German Hard to Learn? Conclusion

Though German can seem difficult for some and easy for others, we feel that overall it is on the easier side of language learning. Again, it is highly dependent on the learner’s motivation and dedication to becoming fluent in German. With proper time and immersion into German, anyone willing to put in the time can succeed. 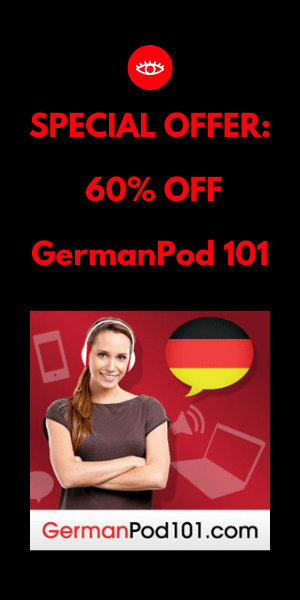