With over 40 million inhabitants each, Spain and Argentina are two of the most populous Spanish-speaking countries in the world. Their capitals — Madrid and Buenos Aires, respectively — are bustling metropolitan hubs, rich in history and tradition. But despite having the same official language, the two cities are quite different, in terms of both culture and geography — they’re over 10,000 kilometers apart (that’s about 6,200 miles, for our American readers).

As a result, the Spanish spoken in Madrid (known as ‘Castilian Spanish’) and Buenos Aires (called ‘Rioplatense Spanish’) is quite distinct — in terms of pronunciation, vocabulary, and even grammar.

Madrid: The most striking and well-known aspect of Castilian Spanish is called distinción, which refers to the pronunciation of the letters “z” and “c”. In Castilian Spanish, when a word contains a “z” before any vowel, or a “c” before an “e” or “i”, it is pronounced not like “s” in “sing”, but rather like “th” in “thing”. Therefore, the words “cinco” and “zorro” are pronounced like “thinco” and “thorro”, respectively. 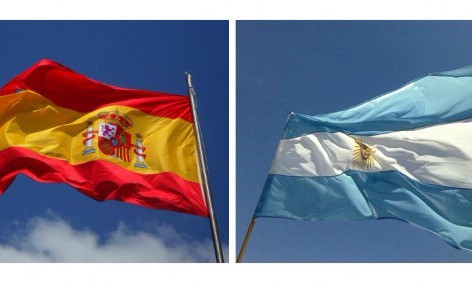 The specific vernacular in Madrid and Buenos Aires varies in diverse ways, from specialized slang to terms for more general everyday words.

Buenos Aires has its own class of street-talk known as “lunfardo”, which is used gratuitously in Argentine films such as Nueve Reinas.

The vocabulary of “lunfardo” — such as afanar (“to steal”) or pibe/piba (“guy/girl”) — is completely foreign to other dialects of Spanish.

Castilian Spanish, too, has its own set of colloquialisms. For example, in Madrid, you will frequently hear somebody exclaim excitedly, “¡Es la caña!” (literally “It’s the cane/fishing pole!”) which translates roughly to “That’s awesome!”. You may also be told not to “dar la lata” (literally “give the can”), which means “to bother” or “to annoy”.

While the particular slang of Castilian and Rioplatense Spanish is fun to learn, more useful are the distinct terms that each dialect uses to refer to everyday objects, such as food and clothing. Indeed, there are several important differences between the two dialects, summarized in the be-low table: 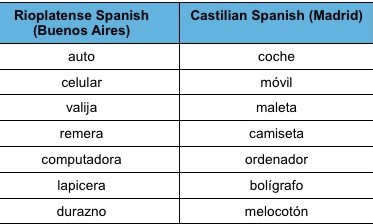 Some differences between Spanish in Spain and Argentina

“Vosotros”, on the other hand, has distinct conjugations, which end in -áis, éis, or -is, depending on the base verb. So whereas other dialects of Spanish would say “ustedes están”, speakers of Castilian Spanish would say “vosotros estáis”.

Buenos Aires: “Vosotros” doesn’t exist in Rioplatense Spanish. However, “vos” does exist, and is used abundantly. But be careful: vos has nothing to do with “vosotros”! Rather, “vos” is the second-person informal singular pronoun, which you probably learned as “tú” (Argentines will understand you if you use “tú”, but they will know that you are a foreigner).

As you can see, the Spanish that is spoken in Madrid and Buenos Aires is really quite different! Which dialect do you understand better? Try your hand at a listening test, and compare your score for the Spain and Latin America versions. And now that you’ve learned the basics of both, you’re ready to navigate the local dialect, so pack your “maletas” (or your “valijas”) — you’re well-prepared, wherever you decide to travel.

Paul writes on behalf of Language Trainers, a language tutoring service offering personalized course packages to individuals and groups. Check out their free online level tests and other resources on their website or send them a quick inquiry to find out more about their tailor-made lesson plans.