Quick answer: No, they are not the same.

And probably the first question of yours after reading this is: Why?

Quick answer: Because British English and American English are not the same either.

There are basically too main reasons for that event, in addition to, the natural mutation of languages: Geographic isolation and influence of other languages. How does it work, or, better said, how did it work?

It doesn’t take too long, if you just take a good look at a map, you see that between Brazil and Portugal one can fit almost perfectly another Brazil. There are around 7,000 kilometers between these two countries. So we Brazilians have not been able to listen to our Portuguese friends in Portugal while those in Portugal have not heard a thing from us. So the speakers of these two countries have developed the same language in two different ways.

Furthermore, Brazil received people from all over the world and so not only from Portugal. We were influenced by many other language systems, beginning with our native languages (from the Tupian family) which were spoken by the indigenous Brazilians who lived in Brazil upon European colonization. Afterwards, we received many African people as slaves, and they also brought many language systems. Overall, many Germans, Italians, French, Dutch, Jewish, Japanese, Chinese etc. arrived in Brazil after colonization.

Ok, now you understand what happened but what are actually the differences? How different they are?

Well, of course they are not much different, since they are still the same language, but I’d say that there are differences enough to fill this post and also to lead to possible misunderstandings. I will explain the main differences going from pronunciation to vocabulary.

Pronunciation: What did you say?

In other words, in BP all the syllables have the same duration, while in EP the unstressed syllables are shorter (sometimes, way shorter) than the stressed ones. As a consequence, in EP there are many closed syllables while BP has frequently open syllables. 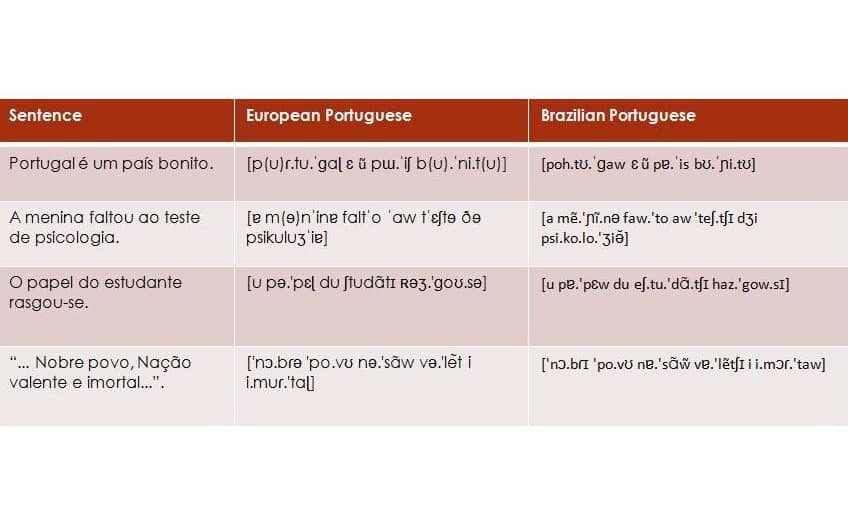 Now some examples showing the phonetic transcriptions of both variations. The sounds between parentheses are the ones who often will be elided. Please note that the Brazilian version is based on my home region of Ceará. There are many wide variations in pronunciation and grammar structure within Brazil (as there are within Portugal).

Below I’d like to show the vowel charts of the variations, so we can see that some sounds are used in EP (right), for example, and doesn’t really exist in BP (left).

Grammar: How did you say that?

Fortunately, there aren’t many differences between the EP grammar and BP grammar, just some small ones.

First, there are some interesting comments about the uses of “you”. Just like in French and in Spanish, there are two ways of expressing the idea of “you”. Unlike these other romance languages, the variations Tu and Você are not perfectly classified like Tú and Usted or Tu and Vous. In some regions Tu is the formal way of address while Você is the informal one. The opposite happens with the same frequency, so Você would be the formal pronouns – especially because it’s a cousin of the Spanish Usted – and Tu (informal). So, if you want to sound formal, you should toss a coin and use heads or tails to decide which one to use. It’s that inconsistent!

Another important difference is the use of the Present Continuous Tense, which in Brazil has a widespread use – reaching a linguistic event called Gerundismo, which means, the exaggerated use of gerund forms. In Portugal, this is not really used because it gives the idea that the action is happening now and will keep on happening until an undefined future point in time.

These are also differences concerning object pronouns – similar to Catalan and Romanian. In Portugal they can be used both before and after the verb while in most cases in Brazil, they are used mainly before it (still respecting traditional rule in Portugal). So in Brazil we can start a sentence using a pronoun, for example Me sinto bem hoje while in Portugal they would say Sinto-me bem hoje.

A small difference is the use of accent marks. Many nouns that take a circumflex in Brazil are written with an acute accent in Portugal. In fact, there were many projects to unify the spelling rules of all countries that officially use Portuguese but these are not just yet uniformly implemented so in our daily lives these spelling differences are still remarkable.

Lexicon: What does that mean?

So besides pronunciation, EP and BP also have lexical differences between them. Well, one must name everything surrounding oneself, so the Portuguese and the Brazilians found different names for the same things. The real problem is that sometimes we use exactly the same word to identify two completely different things.

Let me start with a very interesting one: Bathroom. Bathroom in English is a sort of compound, so we have Bath + Room, meaning the room in which we take baths. Well, in Portugal, someone very creative named it in the same way, just calling it a casa de banho (literally “bathhouse”), which resembles our French and Italian cousins salle de bain and camara da bagno. Ok, ok. But we, Brazilians, we are just amazing. We decided to name that special place in our homes using a suffix. A suffix that generally indicates a profession. In a very irresponsible translation, a banheiro would be similar to bather in English. Apparently, no problem, if it weren’t also the word for lifeguards that hang out on the beach to help swimmers. I’ll make no comment, just draw a conclusion by yourselves.

Another nice one is a queue. They call it bicha in Portugal. But bicha is slang for a male homosexual in Brazil. And by the way, gay in Portugal would be paneleiro, that in Brazil, we would understand as mere pan seller. And if you are in Brazil and you need to buy any sort of meat, you would go to what we call frigorífico, a normal butcher shop. But in Portugal, this same word means a refrigerator – somehow the meaning is the same, where else could we stock meat?