As a native speaker of English whose first foreign language was French, I find the history and interaction between these 2 major global languages fascinating.

French was once used as the main international language for diplomacy but during the course of the 20th century it has usurped by English. However, French is still used as a working language at the UN, as well as, at the EU and is spoken by around 300 million people across the world.

French has the influence of both the German and English languages and at the same time, English is a Germanic language with French and Latin influence. So actually they have a lot of common points, for example, 45% of all English words have a French origin.

Looking for the fastest way to learn French?

This can be explained by the Norman Invasion of England in 1066 by William the Conqueror and for next four centuries, English people spoke both Old English and French, which became the main language of upper classes. French was at that time was the leading language in the world thanks to the strong economic and political position of France. As a result, more and more Englishmen were learning it.

What differences between the French and English can we observe today?

1. Word order. In French the adjectives usually follow the noun, for example une ville moderne (literally: “city modern”), when in English it is said “modern city”. Of course, there are the exceptions in French with such adjectives as bon (“good”), nouveau (“new”), petit (“little”) etc., but it is not the common case.

2. Noun gender. In French, all nouns are either le or la words. This commonly referred to as the “gender” (masculine or feminine) but I find this to be a misnomer as most nouns are neuter so the designation of “gender” is not helpful. In the previous example, the noun une ville (“city”) is a la word (or ‘female’ gender), so the adjective modern(e) will be also change  and add an e at the end. In English, there are no such changes.

3. Accents. In French, the accents (accent aigu, accent grave, accent circonflexe, accent tréma) are used in many words,  when in English only in foreign words.

4. Conjugation. In French, every subject has to be conjugated differently whereas, in English, only the third person (he, she) is different. For example, Je parles (I talk); Tu parles (You talk); Il parle (He speaks); Nous parlons (We talk); Vous parlez (You talk); Ils parlent (They talk).

5.  Negative form. Instead of adding “not” to the main verb as it is done in English, in French we add ne before the verb and pas after it. For example, the phrase C’est Jane (“This is Jane”) in negative form is Ce n’est pas Jane (“This is not Jane”).

6. Capital letters are frequently used in English, in the words of languages, days of week, months, while French grammar tries to minimise the use of capital letters.

1. In French the stress of the word is always syllable even for some English loan words such as McDonald’s, Google and management.

2.  In English there are the sounds like the retroflex “l” (to fall), the “th” (tooth) and the “dh” (mother), which don’t exist in French. That is why French people struggle a lot while pronouncing them.

3. The phenomenon of liaison in French is when a normally silent consonant at the end of a word is pronounced at the beginning of the word that follows it. For example, vous voulez (“you want”) is pronounced as but in the phrase vous avez (“you have”) it is pronounced as.

4. In some cases in French the consonants are not pronounced in the end of the word. For example, in the words froid (“cold”), chaud (“hot”) the final D isn’t pronounced, so phonetically it is and , however in the word sud (“south”) it has to be pronounced, and it sounds as.

5. And of course, the most complicated part of French pronunciation is often the letter r, which is a gutteral sound made deep in the throat. Don’t worry! This one comes with a little of practice!

French was the first foreign language that I successfully learnt and it’s often a very tricky one for native English speakers to master, in spite of the huge amount of similarities between them!

Nailing the French language then set me on a meandering language journey through more than 10 languages. So good luck with learning your languages and never let the ‘differences’ discourage you. Everyone can learn any language eventually!

Have you learnt or do you speak English or French? If so, write me your thoughts and experiences with these 2 different languages in the comments section below. I read all comments I receive.

The Best Podcasts to Learn French

Is French Hard To Learn? 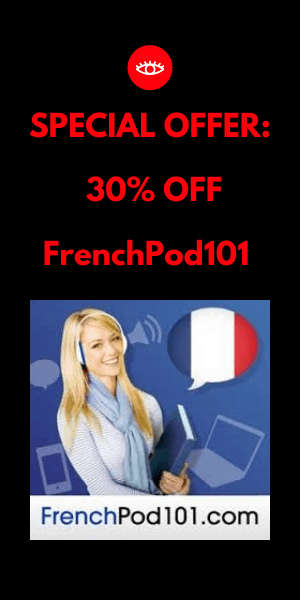