Traveling around ‘Eastern Europe’ is one of my passions as is learning languages.

When I travel across this region I normally use Russian as it’s the most useful lingua franca for communication.

Now that may surprise many readers, especially those who are used to speaking in English no matter where they travel.

However, this can be turned into a plus rather than a minus for a traveler who is motivated to learn and use the local languages instead of remaining dependent on English.

So what is actually not in Eastern Europe today?

Firstly, if you think that Eastern Europe includes Poland, Hungary, the Czech Republic and Slovakia then you are living in another era still!

Those countries are clearly in Central Europe (and there is even a case to be made that they are in fact in ‘Western Europe’ both geographically and politically).

Ditto for the 3 Baltic states: Latvia, Lithuania and Estonia, which are better classified as ‘Northern European’, even though Latvia has a sizable Russian-speaking minority.

Further to the south lies ‘Southeastern Europe’ comprised of the Balkans and stretching all the way to Greece in the south, as well as, Romania and Bulgaria on the Black Sea. 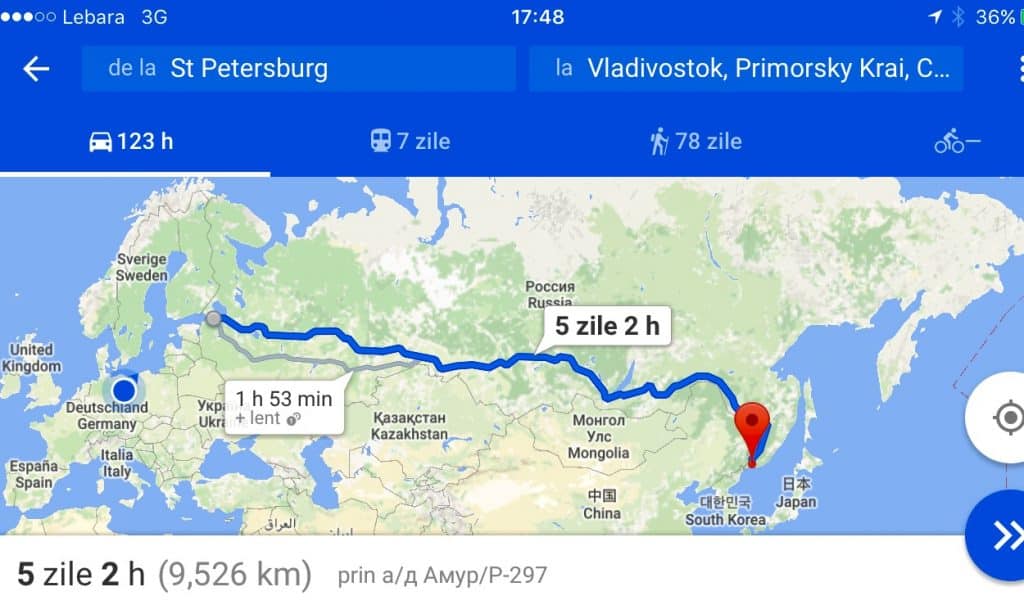 Map showing the route from Saint Petersburg in Eastern Europe to Vladivostok in Asia – all without crossing a border – just Russia!

So what does that leave in Eastern Europe?

Eastern Europe as a region today is made up of the remaining former parts of the USSR that lie in Europe so that’s Russia, Ukraine, Belarus and Moldova.

Moreover, both Kazakhstan and the 3 independent countries in the Caucasus (Georgia, Armenia and Azerbaijan) could make a case that they should also be included in Eastern Europe. However, I would argue that they lie in separate regions which are partially European and partly Asian.

But doesn’t everyone speak English there?

Traveling to Eastern Europe and assuming that English is widely spoken would be a huge mistake.

That means that English is spoken at the same level as in Latin America and China in this region. As a comparison, countries in Central Europe have a ‘high proficiency’ in general.

A large part of your experience will depend on whether you spend your time in touristic or local places, you socialize with young or older people, well-educated or less-educated and whether you are in urban or rural areas.

Russian is the main lingua franca and is spoken well by almost everyone in this region so on average it will be the best investment of your time to learn unless you plan to stick to one particular country or region with a different local language, like in Lviv, Ukraine where I was learning Ukrainian in late 2016.

Occasionally there are some English signs in Eastern Europe – Lviv, Ukraine

So what are the advantages of speaking in the local languages over English?

1. Prices: with the local languages you will be able to get local prices

For example, calling a taxi in Ukraine in Ukrainian or Russian will be 30-50% cheaper than ordering one in English through your hotel/apartment agency.
As of January 2017, Uber now works in some cities in the region but is 10-30% more expensive than using a local taxi.

In my experience, learning and using a multitude of language allows me to understand the local cultures faster and better and facilitates building ever stronger relationships in the region.

3. More information: local tips are normally not in English

More information and resources will be at your disposal if you can read Russian and/or the local language where you are traveling in Eastern Europe.

Most tips and reviews from local people will written online in Russian or another regionally understood language.
Tourist traps are most likely to be reviewed in English.

Which would you rather read?

Languages make traveling less stressful once you have reached an intermediate level in the language (before then I find it’s actually more stressful as you can’t relax enough when trying to speak and understand locals in the new language).

This is because yon’t need to search for someone who speaks English to help you all the time and you can understand more in your local environment, i.e., it just feels less ‘foreign’.

Learning languages is exciting. It gives a dopamine-like feeling when you are making progress.

It’s also an intellectual challenge and you will understand your own language better afterwards as you must break down the new language in order to learn it. This will give you food for thought with your native tongue.

So where should I learn Russian as a foreigner in the region?

If you are a North American or a European then I recommend that you learn Russian in either Ukraine or Moldova in a city that has a lot of Russian-speakers like, Kiev, Odessa or Chisinau.

That’s because Ukraine and Moldova are visa-free for 90 days every 180 and both countries are cheaper than Russia itself.

Have you traveled in Eastern Europe? What was your experience like?