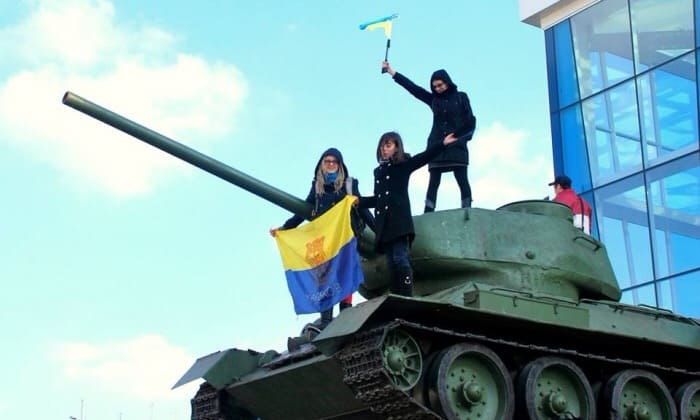 How different is Russian from Ukrainian?

I started learning Russian while studying for my Master in International Relations. I specialized in the ex-USSR and Russian was the obvious linguistic match for this choice.
Later on, I had the opportunity to use my Russian not only in Russia but also in Ukraine, where it is spoken or understood by the majority of people.
Recently, I started learning Ukrainian to facilitate my trips to western Ukraine and it has been striking to me how much in fact Ukrainian differs from Russian.
So what differences and similarities have I noticed between Russian and Ukrainian?

History of the Russian and Ukrainian languages

Russian is the largest native language to Europe but the modern language was formed only in the 18th century following the reforms of Peter the Great. In 1783 the first Russian dictionary appeared.
Ukrainian on the other hand has its origins in the medieval federation of Kievan Rus and after this was conquered by the Tatars, the language became known as “Ruthenian”, which was a mix of East Slavic languages. Modern written Ukrainian was first used in the 17th century during the heydey of the Cossack Hetmanate. At that time the first Kiev Mogila Collegium appears and it became the centre of cultural and language development of Ukraine.
Later on, Ukrainian was forbidden in the Russian Empire and refered to derogatorily as “Little Russian” while Russian was the official language. Ukrainian also became influenced a lot by Polish because of its geographical and political situation as western Ukraine was for a long time part of the Rzeczpospolita (Polish State). So today we can see these two influences on Ukrainian as it has both Polish and Russian versions of many words.
In the 19th century, Russian was still mostly spoken in urban areas, while the rural part of Russian Empire and later of the Soviet Union kept using their own local languages.
Although the USSR did not have an official state language, Russian was an official language in most of the Soviet republics so Russian was the country’s lingua franca and not Ukrainian (or the other languages of the USSR’s republics).
Today many consider Russian and Ukrainian to be very similar languages. However, Russian people usually don’t understand pure Ukrainian. So while Russian and Ukrainian have impacted each other during the times of Russian Empire and the Soviet Union, there is still clearly a big difference that makes mutual comprehension difficult.

So what are the grammatical differences between Russian and Ukrainian?

2. Russian letter “Ы” is “И” [ɨ] in Ukrainian. For example, “бЫк” in Russian is equivalent to “бИк” (the bull) in Ukrainian. In Ukrainian, there are the letters “I”[i], “Ї”[ji] and “Ґ” that don’t exist in Russian. “I”[i] is equal to the Russian “И” and “Ґ”(g) to “Г”. For example, “їсти” (to eat) in Ukrainian is “есть” in Russian. And “Ґ” is rarely used in Ukrainian, there is a list of the words, as “Ґвинт” [gvɨnt] (screw) and in Russian, it is “винт”[vint].
3. In Ukrainian, the letter “Г” is pronounced as Latin H. For example, “гора” (mountain) is spelt like [go-ra] in Russian and “ho-ra” in Ukrainian.
4. Also in Ukrainian there are “E”[e] and “Є”[je] that are equal to Russian’s “Э”[e] and “E”[je]. For example, “дерево”(the tree) in Russian sounds like [dje-rje-vo] and in Ukrainian [de-re-vo].
5. Instead of the hard sign, as in Russian, in Ukrainian, there is an apostrophe. For example “съесть”(to eat) in Russian is “з’їсти” in Ukrainian.
6. Unlike in Russian, Ukrainian still uses the vocative case. It is used when addressing someone. For example, “Батьку!”(Father), when the nominative is “Батькo” or “Іване” [Ivane] when the nominative is “Іван”[Ivan].
7. The Ukrainian language has developed the ending -“мо” [mo]  for first-person plurals in verbs. For example, “Будемо” [budemo] for “we will” while in Russian, this is “Будем” [budem].
8. Ukrainian is the only Slavic language that has an inflectional future or synthetic future tense and so “робитиму» [robitimu] is “I will do” instead of the form “Я буду робити”[ja budu robiti], which would be closer to the English and Russian forms.
The grammatical and pronunciation differences are already described above and there are not many of them. However, my experience has been that Ukrainian vocabulary is very different from that in Russian (estimates vary from 40-60% similarity).
To give you an example, let’s look through the months of the year. Ukrainian has many words with pagan roots, so each month is associated with a natural phenomenon, which characterizes it.
So September in Ukrainian is Вересень [Veresen’] from the word Верес (heather), so the month when heather blooms; whereas in Russian it is Сентябрь [Sentiabr’] and it is almost the same as September in English. The same is for others names of the months.

Get a free class with iTalki here!

In 2016, I went to beautiful Lviv in western Ukraine to learn Ukrainian and my experience was that although the grammar was easy for me to understand, the vocabulary was not. In fact, when watching soccer matches on TV I had to switch the commentary back to Russian as I couldn’t follow it in Ukrainian. 😌
If you are planning a trip to Ukraine, I encourage you to learn at least a little of both of these different yet related sweet Slavic languages. 😀
Have you learnt or do you speak Russian or Ukrainian? If so, write me your thoughts and experiences with these 2 languages in the comments section below. I read all comments I receive. 😀