Are you confused whenever you hear a group of Pilipinos talking in what seem to be a jumbled language of sorts? What you are probably hearing is the Filipino language, the national language of the Philippines whose main basis is Tagalog.

Filipino and Tagalog are essentially identical in all aspects: grammatical system, spelling, sentence structure and vocabulary.  It’s just that the 1987 Constitution designated and affirmed Filipino as the Philippines’ official language that bonds the whole nation in a single identifying language for all inhabitants of its 7,107 islands.

The reluctant separation between Tagalog and Filipino

In a country divided into many ethnic groups depending on regions, there are about 170 dialects and 8 major languages that boast of a million or more users with Tagalog being one of them.

Since it’s the language spoken among natives of Central Luzon that houses the capital city of Manila, Tagalog is looked upon in a higher level among all languages as far as social, historical and political aspects are concern.  Logically it has gained the edge, thus, during the drafting of the 1935 constitution under then President Manuel L. Quezon, Tagalog was declared as the national language of the Philippines.

This has lead to hurt feelings and silent uproar among speakers of the other languages. The Philippine government, with its strong adherence to democracy where sovereignty reigns in the people, has made a move to unite everyone under one language that solidifies all Pilipinos.

They then adapted “Filipino” as the general term that would refer to the name of the country’s national language. But still no one can deny that generally speaking: Filipino is Tagalog and Tagalog is Filipino, one just needs to understand the national issue that surrounded it.

Some language experts consider Filipino as a version of “Tagalog plus others”. This is because Filipino has become the ever-evolving Tagalog with the inclusion of many new and invented words mostly foreign in origin. When you take a stroll in downtown Manila, you’ll commonly encounter the younger generation of Pilipinos speak Tagalog with a lot of twist and twang.  These are accepted, and can be called “Sophisticated Tagalog” or “Modernized Filipino.”

How Tagalog came into existence

Thousands of years ago, inhabitants from the Malayan Archipelago and later the Mongoloids coming from parts of Southeast Asia had reached the Philippines by crossing through land bridges. Then the period from early 7000 BC untill 3000 BC saw large numbers of people from places like the Malay Peninsula, Indonesian islands, Vietnam and China setting foot on the hundreds of beautiful tropical islands of the country.

All these immigrants have made their own significant contributions to the birth of all the dialects spoken in every province of the Philippines, including the soon to become popular Tagalog language.

Tagalog was derived from the words “taga-ilog”, which means “from the river” or “river dweller”, and came from Sanskrit.

There are not many documents that will confirm the earliest sources of the Tagalog language, but there is a theory that says it’s an Austronesian language used by the Malayo-Polynesian race or a language developed by Sanskrit gurus who were long time settlers of the Philippines.

Tagalog’s initial developments have got to do with the major influences from the Malays and the Chinese, and later on from its major colonizers, the Spanish and Americans. It’s known to have its own unique writing system that originated from an ancient script called “Pagbabaybay or Baybayin” that uses syllabication.

From 1565 until the last month of 1898, the Philippines was under the control of the colonial power of Spain. The Spaniards took control for almost three and a half centuries. This is the reason why they have the greatest influence on every area of a Pilipino’s life.

They also introduced Catholicism, which played an important role in revolutionizing the Tagalog language. Proof of this is the Doctrina Christiana, a Catholic literary book and the first ever book printed in the Philippines that has both Tagalog and Spanish versions.

Tagalog’s system of writing has also changed, from the ancient alphabet to the use of Roman alphabet. Spanish loan words also comprised the entirety of the language, making up around 15% of the total Tagalog words.

Some of the most common Tagalog words borrowed from the Spanish language which you can hear daily are: edukasyon (education), tsinelas (slippers), silya (chair), kamusta (how are you), sabon (soap) and thousands more. 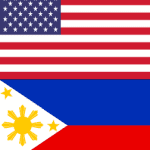 The Americans came before the turn of the 19th century and their English language has continued its domination over the entire country next to Tagalog, of course. It’s the second language of Pilipinos, and is learned as early as 4 years old with many private institutions choosing it as their medium of teaching.

English being the international language has been fully embraced by Pilipinos, incorporating it to blend nicely with the Tagalog language.

The Pilipinos’ love and passion for English gave way to the highly modernized “Taglish” (Tagalog-English) dialect. It’s a combination of both languages and is widely accepted especially among the youth of today. Try watching TV, read the country’s news or simply eavesdrop on the conversations among Filipino youngsters, and you’ll agree that English has indeed touched the heart and soul of the Tagalog language.

Tagalog as a language has gone through so many changes. It’s continuously evolving, far different now from what it used to be. It’s not yet ready to rest just yet as still has a long journey ahead of it before it reaches its final stop.